It’s been just over 2 months since the end of the 2012-13 winter squash season at Concord Academy. One of the most frequent questions I get asked is “how was your season?” As with most things, looking back there were pluses and minuses, wins and losses and positives and negatives.

As a team, the girls varsity squad had a losing season, but were able to avoid low morale by the players’ ability to act as peer coaches for each other. The girls team maintained a positive dynamic during practices and matches. Meanwhile, the boys squad had a successful winning season.  They earned a place in the B Division at the New England Interscholastic Squash Association’s Championships and performed well with two of seven players finishing in the top 5 in their draws. 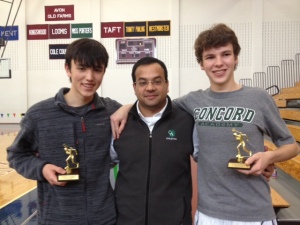 Even though there were two adult coaches for both the girls and boys teams, it proved difficult to adequately provide feedback to each member of the team in a timely fashion. Nonetheless, both the boys and girls captains and team members stepped up and demonstrated solid teamwork and communication that will bode well for their futures.