Keeping it Real in Spain?

My paternal grandfather and father, were both good amateur soccer players in their youth. While on a recent vacation in Spain, I was staying close to Real Madrid’s stadium. I must admit I did not intend to blog about the La Liga, Spain’s premier football division largely because I did not know much about the teams. When I found out that my hotel was near the stadium, I decided to take a walk around the Madrid neighborhood to see for myself. 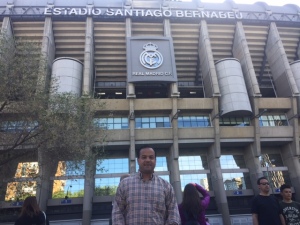 Like many Americans, sports coverage in the United States is mainly focused on the NFL, NBA, MLB and NHL. Major League Soccer in the United States has grown significantly and U.S.Soccer team has had some strong performances in previous World Cup Championships. In Europe, soccer is the sport that captures the public interest with international soccer starts like Real Madrid’s Ronaldo and Barcelona’s Messi. The best of the best players in developing countries sometimes make it into the soccer leagues of Europe and North America.

Economics drives the investment in sport stadiums like Read Madrid’s and other stadiums around the world. From Wimbledon to Fenway the infrastructure to compete and maintain in such stadiums costs millions. Many parts of Asia and Africa are prohibitively expensive for the public to bear such an investment (considering other competing demands) which is why only the best of the best players from developing countries make it to play in the West.

Squash is a minor sport relative the world’s love of football so my walk through this Madrid neighborhood, helped me to keep it real with more perspective on the urban squash movement.