Over the past few days, I was fortunate to attend the 3rd International Forum on Sport for Peace and Development at the United Nations Headquarters in New York. United Nations Secretary General Ban Ki-Moon and the Dr. Jacques Rogge, President of the International Olympic Committee led the opening session of the Forum. Here is the official UN press release. 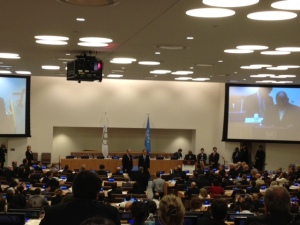 As a member of the International Sport for Development and Peace Association, I attended the forum to represent Khelshala (India) and Kidsquash (USA) to learn, connect and collaborate with others working in the field of sport for development and peace. An informal meeting of practitioners, researchers and educators provided an opportunity for networking as well as an avenue for sharing updates on university programs, research and sport-based youth development initiatives.

There were several references made by Mr. Wilfred Lemke, UN Special Advisor on Sport, on the role of volunteerism in sport as a means to activate young people. As a former United Nations Volunteer, I believe this would be a valuable experience for aspiring development professionals. Thanks to the organizers of the event it was an opportunity to learn from the nuances in high-level, policy discussions as well as be at the forefront to mainstream sport-for development programming in the United Nations systems and beyond.